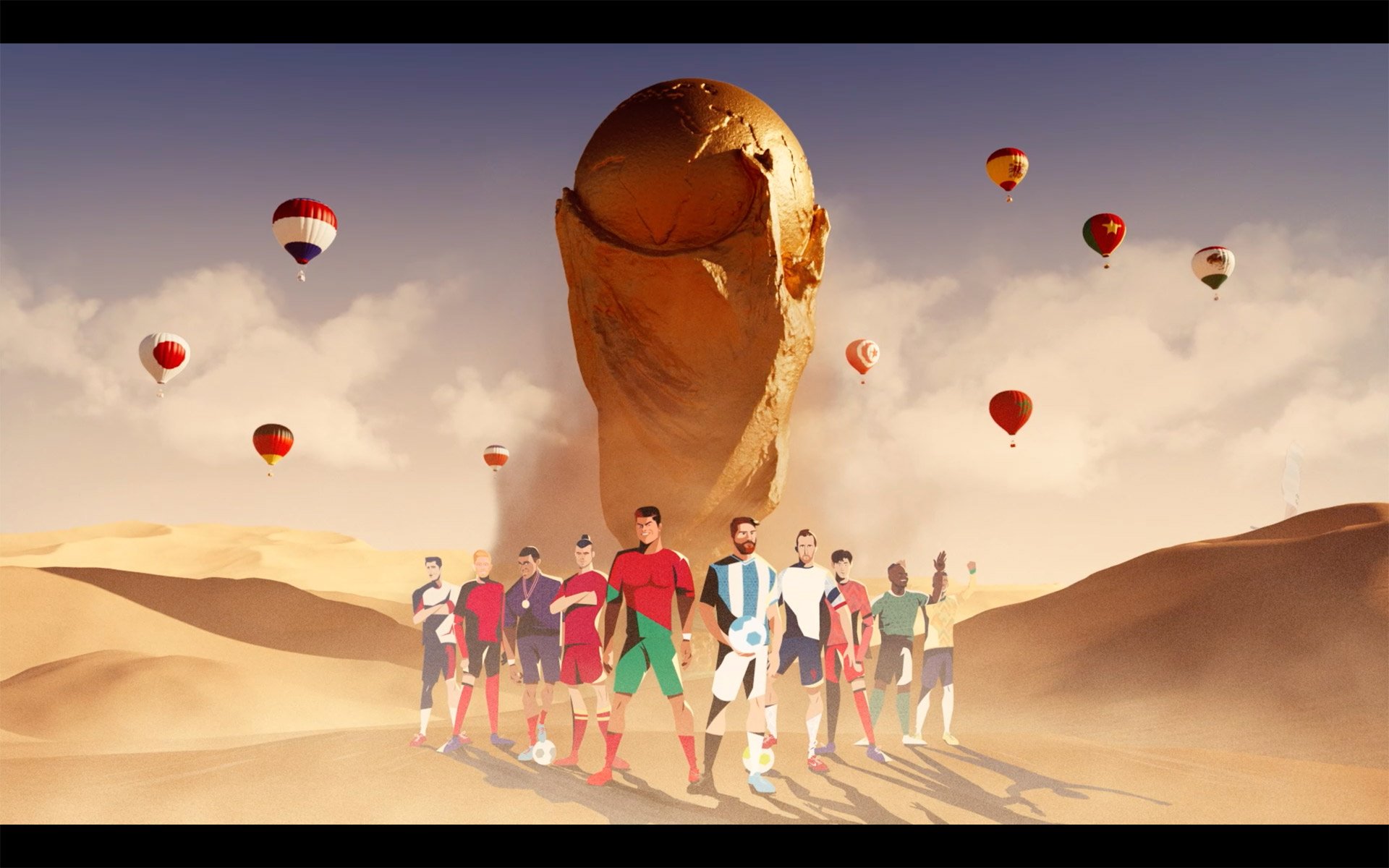 Q&A WITH NOAH MEDIA'S EXECUTIVE PRODUCER DAVID SNOWDON AS HE REFLECTS ON THE MAKING OF A MEMORABLE TITLE SEQUENCE FOR ITV.

Q. What was your role and how many people worked on the title sequence for ITV?

A. I was Executive Producer on the project - leading a team of five on the creative side excluding the internal creative and production support we have here at Noah.

Q. How was the creative idea for the title sequence decided?

A. We had a number of creative meetings in the office to work on a concept. We would go through ideas we thought might work and build on them. It was during this process that we questioned how the players would get to Qatar halfway through a football season. We knew we were onto something once everyone started chipping in with various funny modes of transport. We clearly knew that we wouldn’t be able to get Gareth Southgate in a rowing boat or Ronaldo on a super yacht so animation was our only option! We wanted a fun character design but were also keen to bring it into a 3D setting. After some research, we worked on the idea of a pearl turning into the World Cup trophy as our narrative and then mapped out a structure.

For the music, ‘Around the World in 80 days’ seemed like a great choice so I searched for various versions of the title music and came across the City of Prague Philharmonic Orchestra’s version of the track, it worked perfectly with the mood we were aiming for.

We pitched our concept to Paul McNamara - Senior Director and Executive Producer Major Events at ITV Sport, who thankfully bought into our vision and awarded us with the project. It was a brave decision as it is always risky going for a character based title sequence with the chance of players getting injured in the weeks and days before the tournament.

Q. What was the hardest thing to create in the titles, or the most challenging point in the project?

A. In the early stages of production, we brought in Pedro Allevato of Sugarblood animation studio to bring our characters to life. There was a lot of discussions on how we would combine Pedro’s 2D style into a 3D environment, a job that Noah's head of 3D, Hugo Johnson took in his stride.

Certainly the most challenging aspect of the titles was reacting to last minute player injuries - you are just praying that the players you have designed and spent a lot of hours working on make it to the tournament, so to lose Sadio Mane in the weeks before the World Cup kicked off was really disappointing. However, our motion graphic designer, Adam Constable saved the day by replacing him with Chelsea goalkeeper, Eduard Mendy in time to repackage a number of deliverables and get it to ITV in time for their team leaving for Qatar.

Q. What is your favourite part of the titles and why?

A. It is really hard to pick a favourite moment, but if I was forced to choose I would have to say the Messi and Neymar horse race through the desert. Horses are notoriously difficult to animate but the team worked very hard to get it right, and in what will probably be Messi’s last tournament it is great to see him riding into the sunset in search of the trophy that had eluded him in his career.

Q. With supporting assets such as the ad break bumpers, how many assets in total were delivered to ITV?

A. It was an extensive deliverable list, let's put it that way! The title sequence gets shown at the top of each show, but assets such as the Break Bumpers get far more airtime. We knew it was imperative that we created enough so they didn’t get repetitive in each broadcast.  But as well as 223 (!) bumpers, we delivered 33 transmission wipes as well as looping backgrounds and closing sequences.

Q. World Cup title sequences can be much anticipated and fondly remembered.  What is it that makes them special?

A. Having grown up watching the World Cup and the title sequences that preceded the broadcasts, you never dream of being given the opportunity to actually produce one.

With a World Cup only taking place every four years, and the high standard of production companies that you are competing against, getting the chance to create the title sequence for a major broadcaster is a huge honour. It is one thing having the idea, but without an amazing team beside you who can bring it to life it would be impossible. All the team are very proud of what we have created for ITV, and very grateful to Paul and his team for trusting us to deliver a little bit of history for the greatest football tournament in the World.